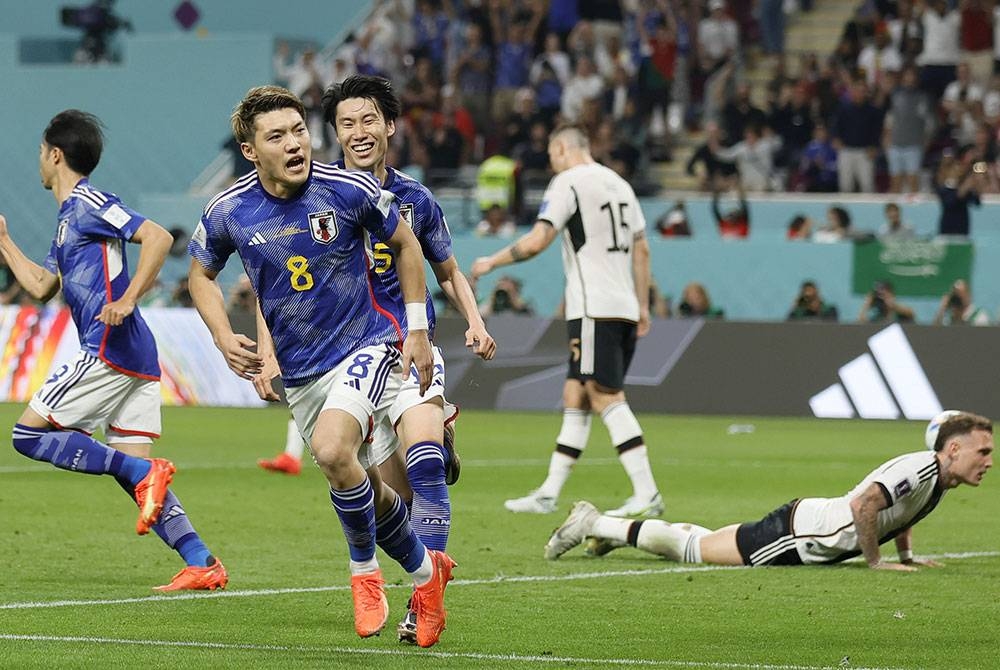 AFTER Saudi Arabia, another Asian representative, Japan created the biggest surprise in the 2022 World Cup campaign after scoring a 2-1 victory over Germany at the Khalifa International Stadium, Doha just now.

As predicted, Japan displayed a high fighting spirit throughout the 90 minutes of the match to surprise Germany, who is also a four-time world champion, in the opening action of Group E.

Germany, on the other hand, should blame themselves for failing to finish off a string of chances to break the Japanese goal when they dominated the game as soon as the starting whistle sounded.

Japan first shook the German goal when Daizen Maeda managed to push the ball in from Junya Ito’s cross as early as the eighth minute.

However, the goal was disallowed because Maeda was found to be in an offside position.

Germany began to appear more organized to control the game and their efforts paid off through Ilkay Gundogan’s penalty in the 33rd minute.

Kai Havertz almost extended Germany’s lead in stoppage time, but his goal was ruled out for offside.

Continuing the second half, Germany seemed to be more eager to add more goals, but Gonda held firm to save his goal from being conceded.

Kudos to Gonda when he managed to save four dangerous attempts in a row, three of which came from Serge Gnabry.

At a time when Germany was actively pressing the opponent’s defense, Japan managed to score an equalizing goal through Ritsu Doan who finished Takumi Minamino’s cross in the 75th minute.

The goal clearly fueled the spirit of the Blue Samurai squad until they managed to add a second goal through Takuma Asano eight minutes later.

Germany tried to get up to score, but Japan’s defensive line was strong and held until the final whistle.

On Tuesday, Saudi Arabia managed to pull off a surprise after defeating the South American giants who are also Copa America 2021 champions, Argentina 2-1 at the Lusail Stadium.